If you have lost the original insert that came with your purchase of Catch Phrase by Hasbro, we have a scanned copy for you here.

(We also have the rules for Ultimate Catch Phrase.) 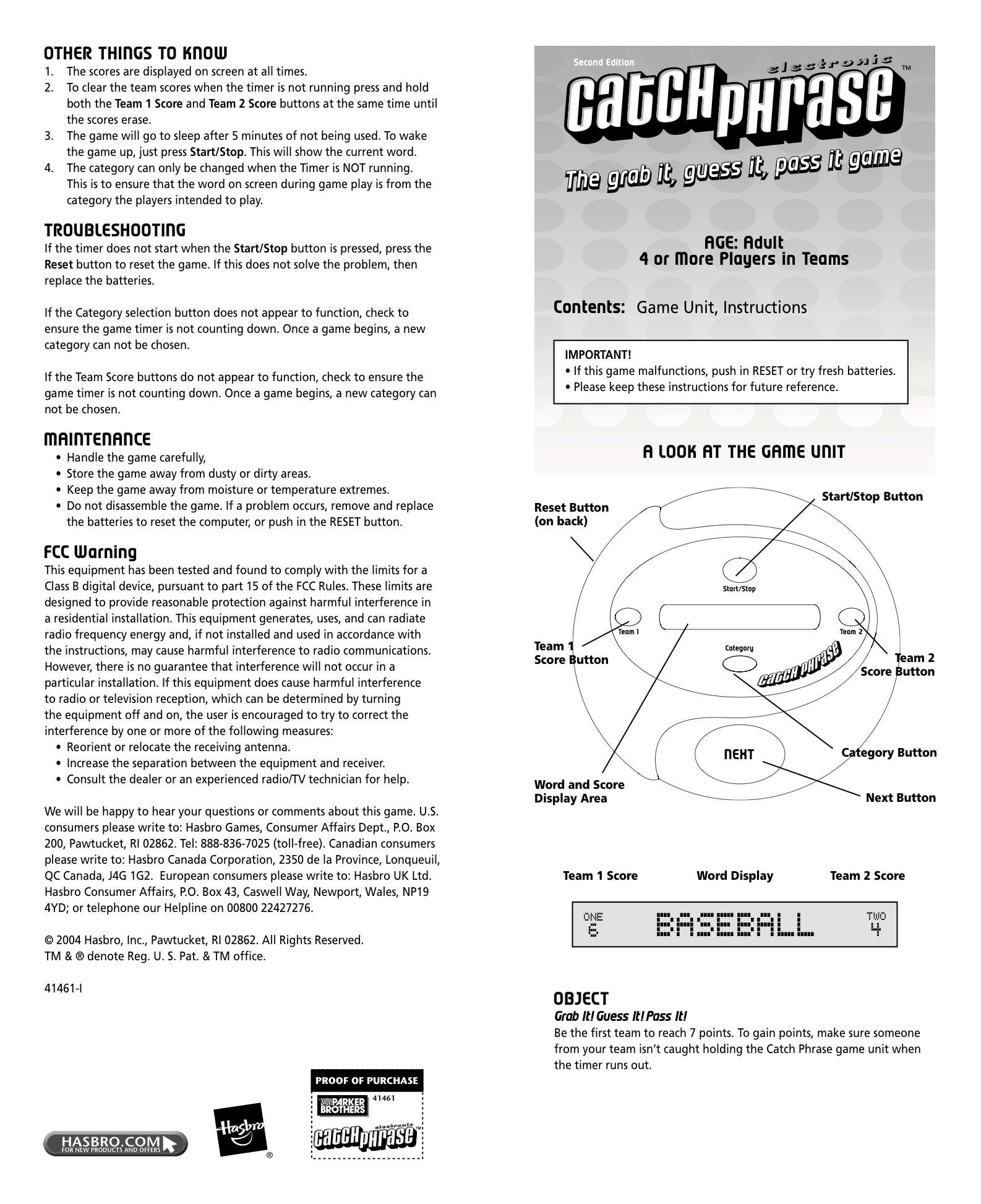 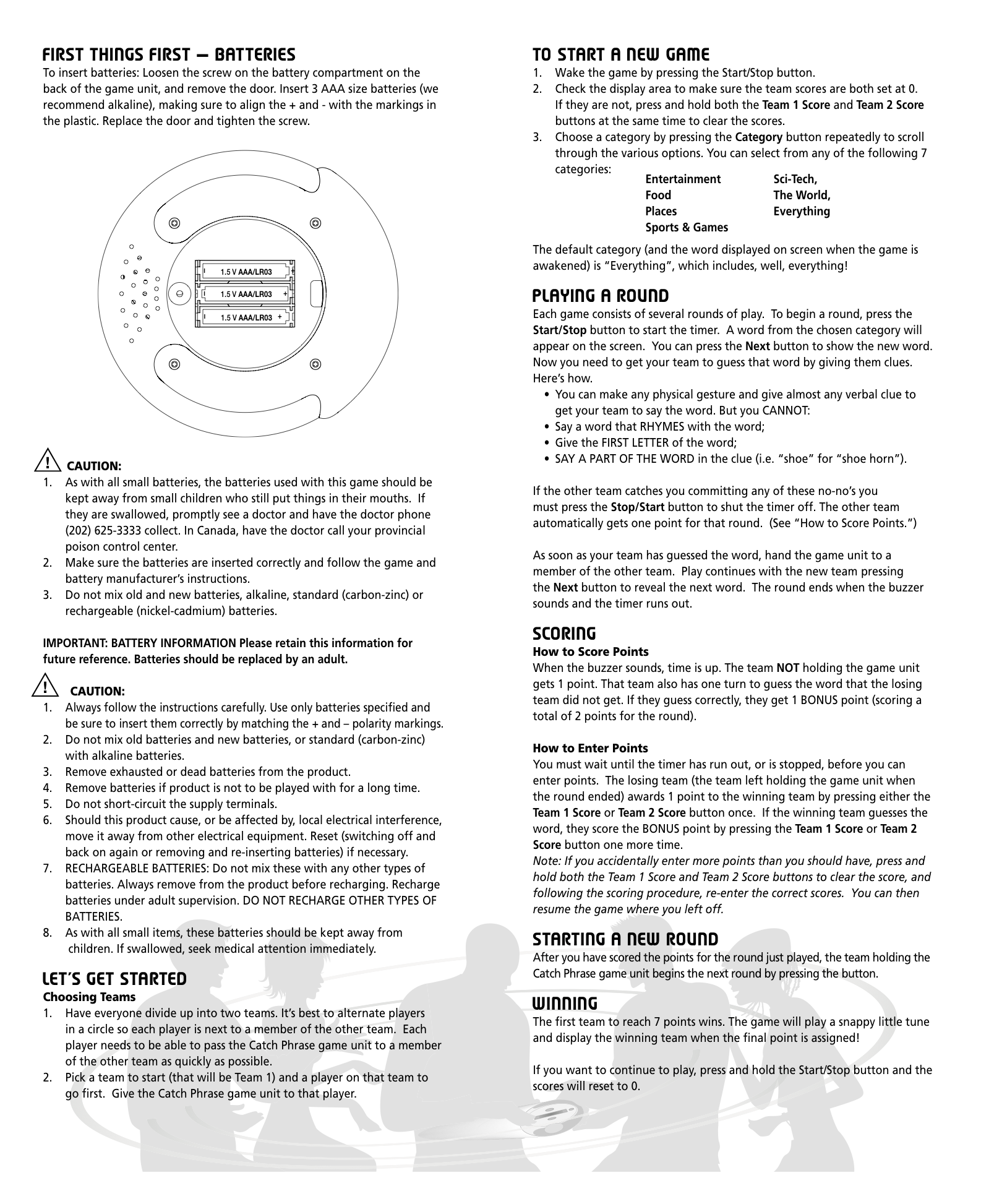 OBJECT
Grab it! Guess it! Pass it!

Be the first team to reach 7 points. To gain points, make sure someone from your team isn’t caught holding the Catch Phrase game unit when the timer runs out.

TO START A NEW GAME

The default category (and the word displayed on screen when the game is awakened) is “Everything”, which includes, well, everything!

Each game consists of several rounds of play. To begin a round, press the Start/Stop button to start the timer. A word from the chosen category will appear on the screen. You can press the Next button to show the new word. Now you need to get your team to guess that word by giving them clues. Here’s how.

If the other team catches you committing any of these no-no’s you must press the Stop/Start button to shut the timer off. The other team automatically gets one point for that round. (See “How to Score Points.”)

As soon as your team has guessed the word, hand the game unit to a member of the other team. Play continues with the new team pressing the Next button to reveal the next word. The round ends when the buzzer sounds and the timer runs out.

How to Score Points
When the buzzer sounds, time is up. The team NOT holding the game unit gets 1 point. That team also has one turn to guess the word that the losing team did not get. If they guess correctly, they get 1 BONUS point (scoring a total of 2 points for the round).

How to Enter Points
You must wait until the timer has run out, or is stopped, before you can enter points. The losing team (the team left holding the game unit when the round ended) awards 1 point to the winning team by pressing either the Team 1 Score or Team 2 Score button once. If the winning team guesses the word, they score the BONUS point by pressing the Team 1 Score or Team 2 Score button one more time.

Note: If you accidentally enter more points than you should have, press and hold both the Team 1 Score and Team 2 Score buttons to clear the score, and following the scoring procedure, re-enter the correct scores. You can then resume the game where you left off.

STARTING A NEW ROUND

After you have scored the points for the round just played, the team holding the Catch Phrase game unit begins the next round by pressing the button.

The first team to reach 7 points wins. The game will play a snappy little tune and display the winning team when the final point is assigned!

If you want to continue to play, press and hold the Start/Stop button and the scores will reset to 0.

OTHER THINGS TO KNOW

If the timer does not start when the Start/Stop button is pressed, press the Reset button to reset the game. If this does not solve the problem, then replace the batteries.

If the Category selection button does not appear to function, check to ensure the game timer is not counting down. Once a game begins, a new category can not be chosen.

If the Team Score buttons do not appear to function, check to ensure the game timer is not counting down. Once a game begins, a new category can not be chosen.